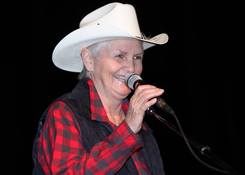 Use the grey bar on the right of the song titles above to scroll down for more songs to listen to::


READ a selection of Mag's poems:
From a Sampler of Mag Mawhinney's Poems :
CHILDHOOD IN THE CARIBOO
JEANS
SOMETHIN' ABOUT A COWBOY


CHILDHOOD IN THE CARIBOO
""Childhood in the Cariboo" is one of the first poems I wrote
and it talks about my roots. "

In nineteen hundred and forty nine,
we lived in a wonderful place
where I could skip, and jump and run,
so free, with the wind in my face.

I'd call "Hello!" across the valley
to a friend who was waiting there.
She'd call back after the echo
in the cool, crisp mountain air.

It was thirteen miles to the schoolhouse
and a cowboy drove the bus.
We'd yodel and sing, he didn't mind,
he'd just hum along with us.

We'd play "Run Sheep Run" and "Frozen Tag",
slide on cardboard down the hills,
or jump on top of the sawdust pile
down at the lumber mill.

The hired hand in the bunkhouse
would play his guitar on his knee--
"I'm So Lonesome I Could Cry"
was the song he'd sing for me.

We'd play "cowboys and Indians"
with only a stick for a gun
and swingin' from trees on a windy day
was always lots of fun.

We'd ride atop the horses
as they were led home from the woods
and the stone-boat was my chariot,
haulin' water and other goods.

We'd use our imaginations
for all the things we did,
in nineteen hundred and forty-nine
when I was just a kid.

I've gotta give a hand to that smart-thinkin' man
who invented those denim blue jeans.
They're made in all sizes, with low and high rises
and everywhere else in between.

There's blues in all shades with deliberate fades,
there's even holes in some of those jeans.
Some are fancied-up duds with rhinestones and studs
and some styles made only for teens.

But when you are older and gravity takes over,
it's pretty hard to get a true fit.
If they're snug at the hip, then the zipper won't zip
and circulation cuts off when you sit.

I've changed since I've wed, I've got middle-aged spread
with a butt that is no longer there.
If the waistline fits right and not feelin' too tight,
then the sides sorta flap in the air.

So I searched all around and I finally found
a style that is made overseas,
but I'm sad to report that the legs are too short
and the hemline's way up by my knees.

But, technology came through with somethin' brand new,
now I'm wearin' those spandex kinda jeans
'cause they fit 'round my middle and stretch just a little
for those sourdough biscuits and beans.

SOMETHIN' ABOUT A COWBOY

There's somethin' about a cowboy
not shown on a Hollywood screen;
it's more than a John Wayne image
'cause it's somethin' that can't be seen.

There's just somethin' about a cowboy
that is more than a Hollywood role--
it's known as "the western spirit"
and it's found in a cowboy's soul.
Powered by